Best Places to Elope (And How to Do It)

Best Places to Elope (And How to Do It) 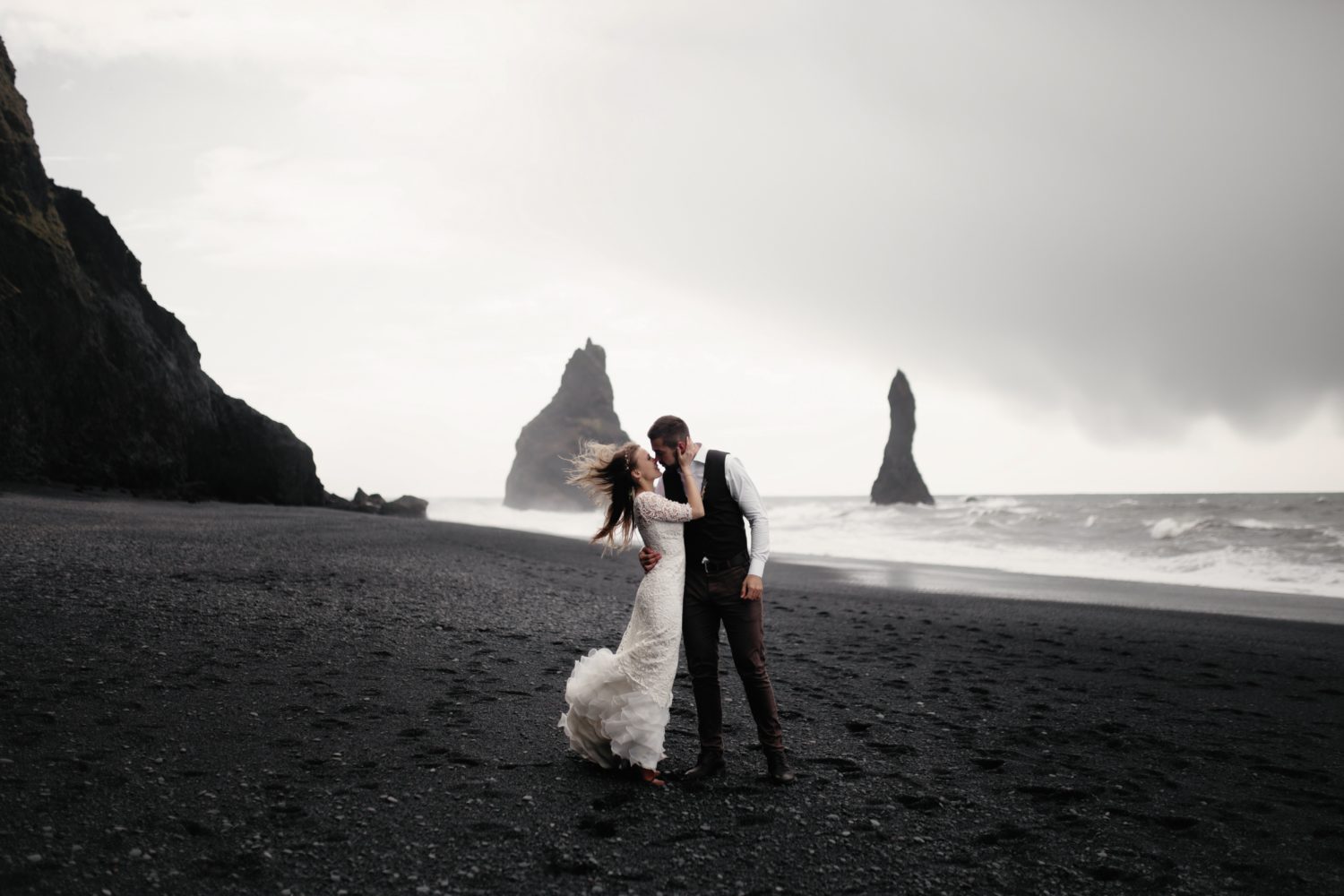 If you simply can’t wait to get married, have you considered elopement?

You may be thinking about eloping because the idea of wedding planning seems exhausting enough. Or maybe you’ve crunched the numbers and decided your hard-earned money is better spent elsewhere. Unless you’re deciding on heading over to your local city hall on a whim that same day, you should plan on doing at least some elopement planning.

Modern elopements are small and intimate, and do require some thought. Sure, you won’t have to think about a guest list (arguably the most stressful part of wedding planning), but do you still want a wedding gown or suit? What about wedding bands? Should you hire an officiant and a photographer? Do you want to elope abroad? Should you create a wedding registry?

Even with some planning, however, elopements on average are far less expensive than weddings. With the average wedding in the U.S. costing upwards of $33,000 on average, a simple courthouse elopement, for example, can cost less than $100. Factor in a small budget for attire, photography, and travel—you could be looking at a few thousand versus tens of thousands of dollars.

In fact, millennial couples are waiting longer to get married, largely in part to the financial burden of planning a big wedding. More couples are turning to planned elopements, or “microweddings”, and saving the big reception for a vow renewal with loved ones down the line.

Is an elopement starting to sound enticing? Let’s break down the process, answer the burning questions, and even offer some incredible locations across the world to get hitched on the fly.

Eloping with your partner can be as easy as walking over to your local courthouse (depending on your city—some require waiting periods), filing the paperwork, and saying “I Do”. Many couples are choosing the planned elopement route, but knowing where to begin can feel like a doozy.

1. What kind of elopement are you interested in? Some couples would be happy with a trip to City Hall, while others will want to book an elopement package at a resort in Hawaii. Some will want a few family members there, some prefer it to be just the two of them. Talk things over with your partner, decide what’s realistic for your budget, and start a game plan!

2. How soon do you want to get married? This will help you determine a timeframe for planning and for a budget. We recommend giving yourself at least 4-6 months to plan an international elopement. It’ll give you enough time to get your documents and license in order, book your trip, and hire any vendors.

3. Do you want to hire an officiant? This depends on you! Filling out paperwork in advance means you can simply walk into a courthouse, get your marriage license, and call it a day. If you would rather organize a small ceremony for an opportunity to exchange vows, an officiant is always a great idea. If you’ve decided to travel for your elopement, browse officiants in the area where you’re traveling. This could get tricky in an area where English isn’t their first language, so plan ahead!

4. What documents do you need? To apply for a marriage license, most states require the following documents:

5. Is it legal to get married abroad? Yes, if you file the proper paperwork. There are two options for this—first, you can get officially married at your local courthouse before or after your international elopement adventure. The second way is to find a US consulate in the area where you’re traveling and file paperwork there. The former is always the easiest option. Check out the US Department of State’s website for more information on getting married abroad.

6. What should I budget for? This entirely depends on which elements of a wedding are most important to you. Some things to think about:

7. Do I need a wedding registry? We always think a registry is a great idea! Elopements don’t have to mean running off in secret. They’re still planned, and you can even announce it to your loved ones before or after the fact. Some of your friends and family will likely still want to contribute or congratulate you in some way. What better way to do it than with a registry?

The type of registry you build will depend on what you need or want. If your loved ones know ahead of time what your wedding plans are, maybe a cash registry to help fund the elopement is the right choice. You could also go the traditional registry route, or a blend of physical gifts, cash gifts, or experiences. Our sample registries, wedding registry checklist, and collections are a perfect way to get you started.

Now that we have the if’s, what’s, and how’s sorted out, we can start thinking about the where’s. We’ve surveyed and researched to find some of the most incredible places to elope, by continent, anywhere in the world.

As Seattle residents, we know just how beautiful the Pacific Northwest is, and Orcas Island will blow your socks off. Tie the knot at any number of small hotels and inns, including Spring Bay, where you can book an incredibly intimate elopement (with musical accompaniment!) overlooking the Pacific Ocean. 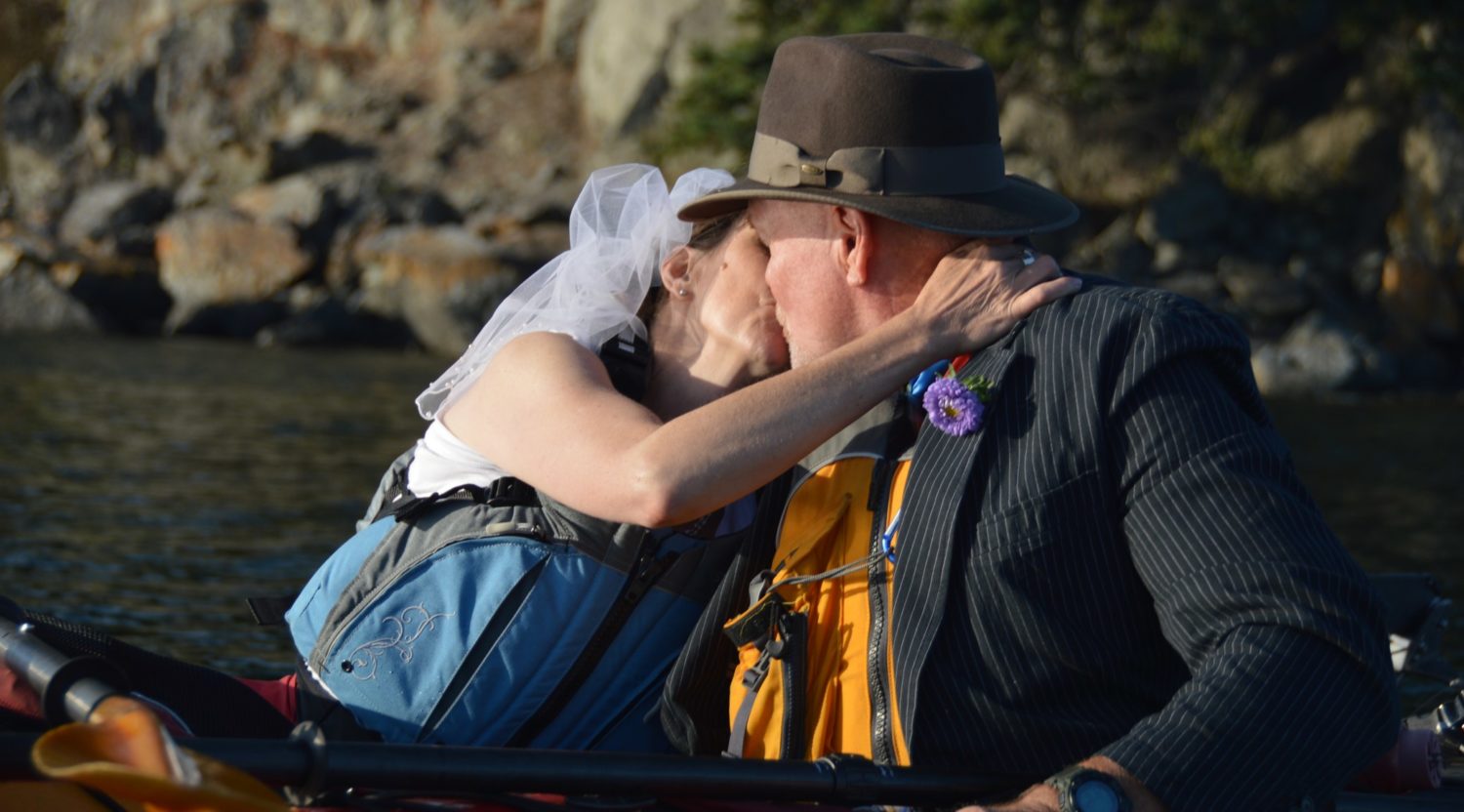 There’s something for everyone in New Orleans. The food, the music, and the culture are undeniably welcoming and intoxicating. What better place to celebrate a lifetime of love and happiness?

The Ace Hotel, a modern hotel that drips with the NOLA vibes everybody loves, offers an elopement package for $1,100. The package includes 2-night stay, courtyard ceremony, sparkling wine, and breakfast for two. 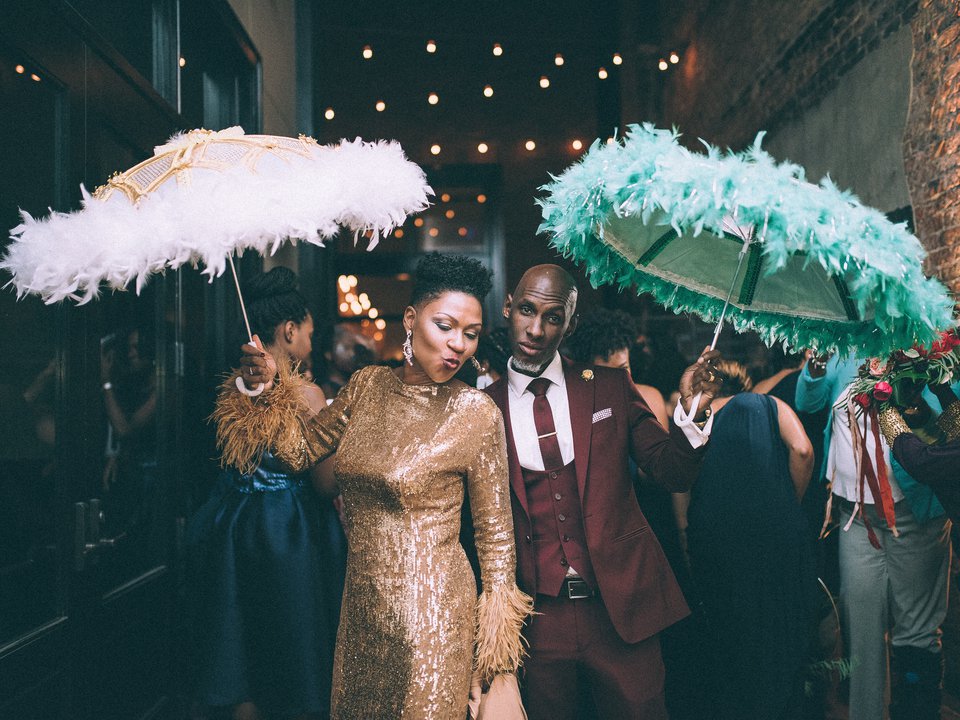 Imagine this: You and your partner exchanging vows, unbothered by a drizzle of rain, on a cliff overlooking the ocean. Does this sound like a dream to you? It doesn’t have to be.

Photographer Heather Nolan has photographed a number of elopements all over the easternmost province of Canada in Newfoundland, including Lake Harbour and Bell Island. Maybe you’ve never considered getting hitched in this corner of the world, but a peek at Heather’s portfolio may just change your mind. 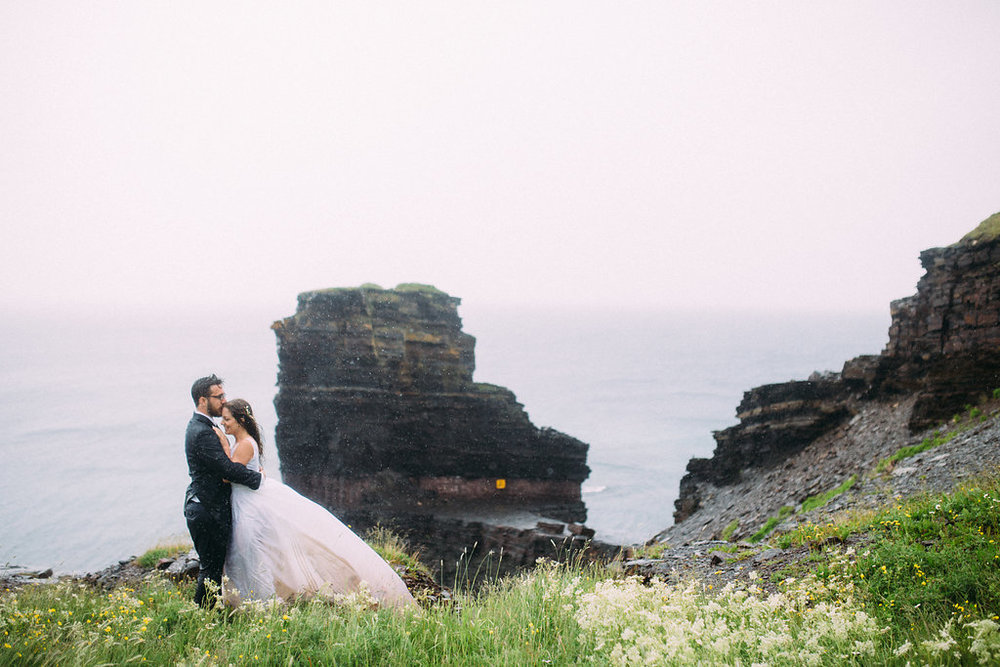 Say “I Do” in the Savoie Rhône region in south-eastern France, tucked away in the countryside of the Alps. Cozy up in a small hotel in Saint-Martin-de-Belleville and enjoy a 3 Michelin star meal at La Bouitte. Saint-Martin-de-Belleville is part of the Les Trois Vallées, a popular ski region and home to the largest ski area on the globe. The region is also beautiful in the summertime, where you can get hitched in the mountains and hop on a short 2-hour train ride to Lyon to continue the celebration. 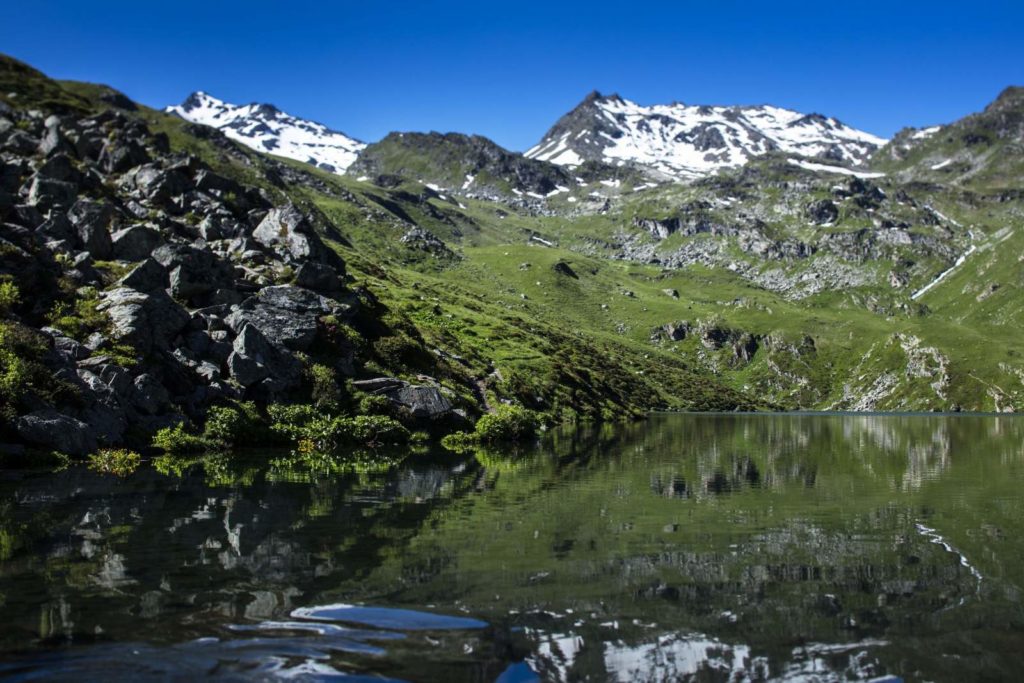 Your fairytale wedding fantasies will come true with an elopement in the Scottish Highlands. And after you do, you can finally have something in common with Patrick Dempsey and Michelle Monaghan from Made of Honor if you decide on Eilean Donan Castle. We’re sold!

Spain is an unforgettably romantic destination, and Granada’s exceptional culture and history are a standout elopement destination. No matter where you go in the city, you’re sure to find gorgeous nooks to tie the knot. Prefer something a little more planned? Contact a local hotel or wedding planner, like Mery Liccardi, to ask about their elopement packages. 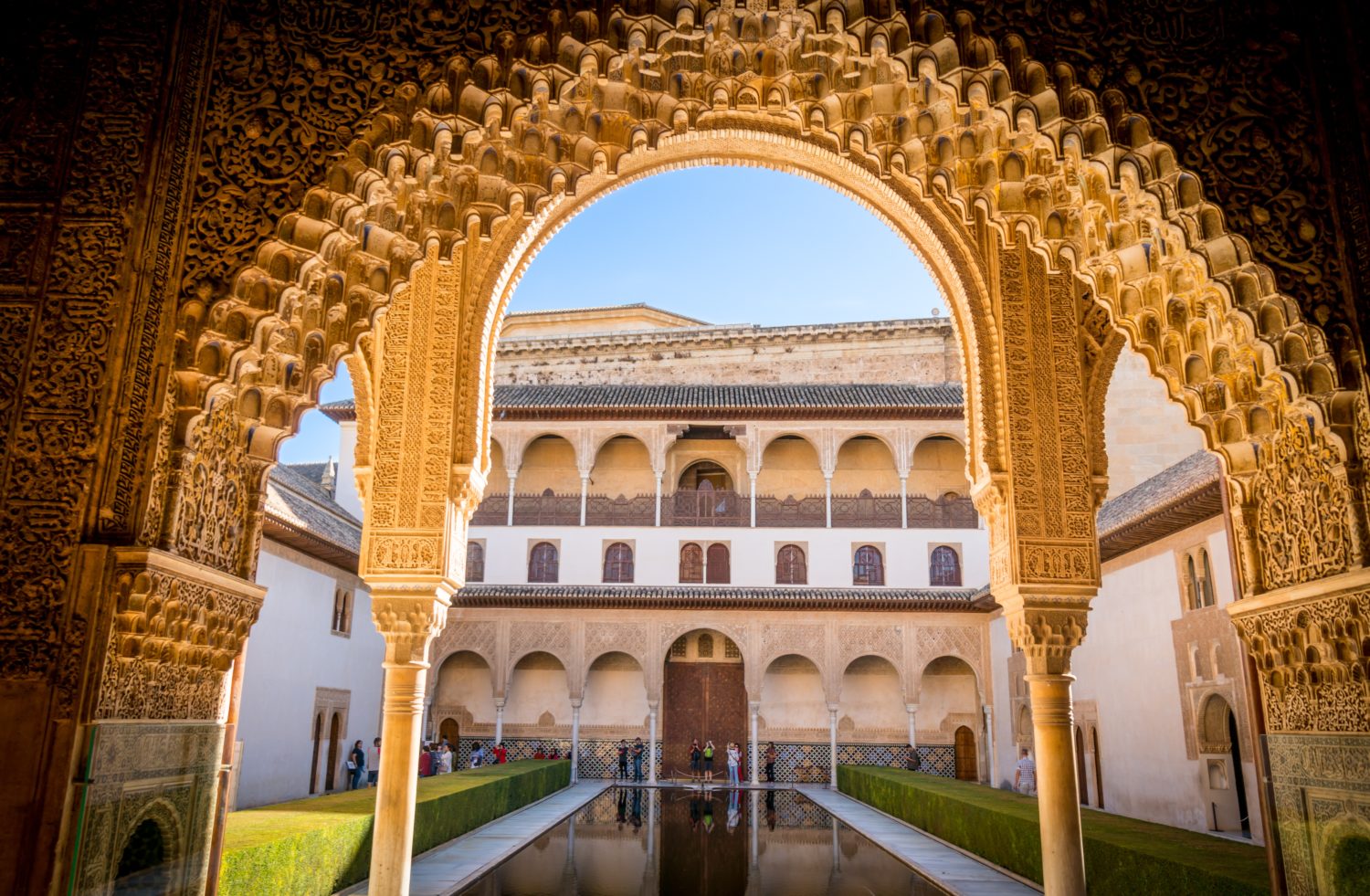 Phang Nga, and Thailand in general, is home to a slew of gorgeous resorts and hotels ideal for tying the knot in paradise. The Koh Yao Noi Treehouse Villas are no exception. They offer wedding and elopement packages that include everything from accommodations, florals, a ceremonial Love Tree planting, to the wedding cake. 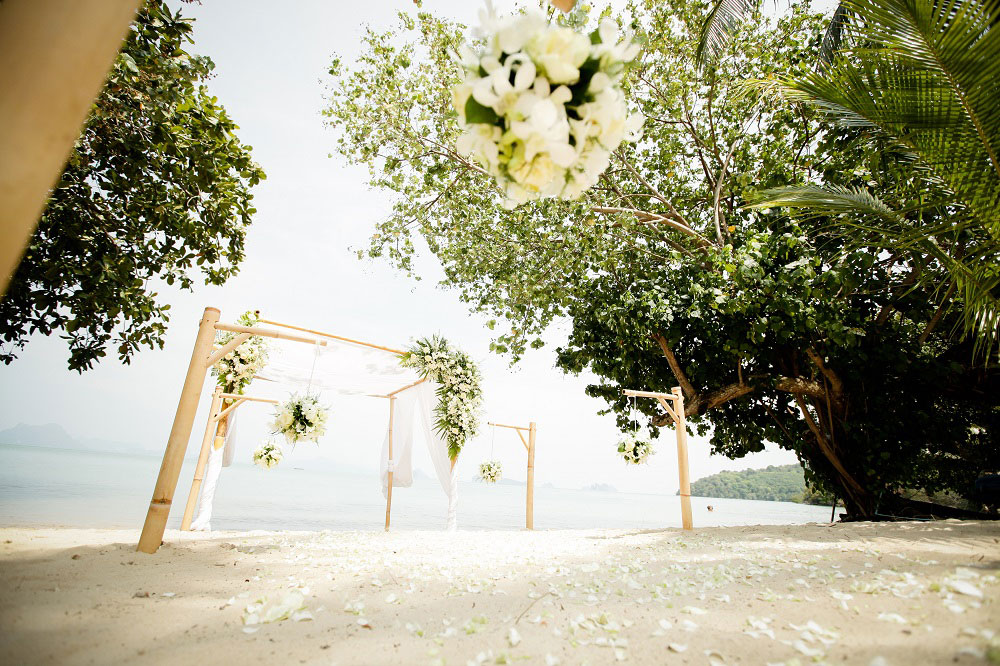 You have everything you could want in Tokyo, Japan. From sparkling city lights to peaceful gardens and temples, eloping in Tokyo will leave you wanting for naught. Book an intimate ceremony in the gardens of Mejiro Teien for just over $1,200 USD, including the photographer, and venture out into the bustling city for the ongoing festivities. Wedding planners Serendipity Flower is a fantastic option for an all-inclusive elopement package. Extra points if you can make it during sakura (cherry blossom) season. 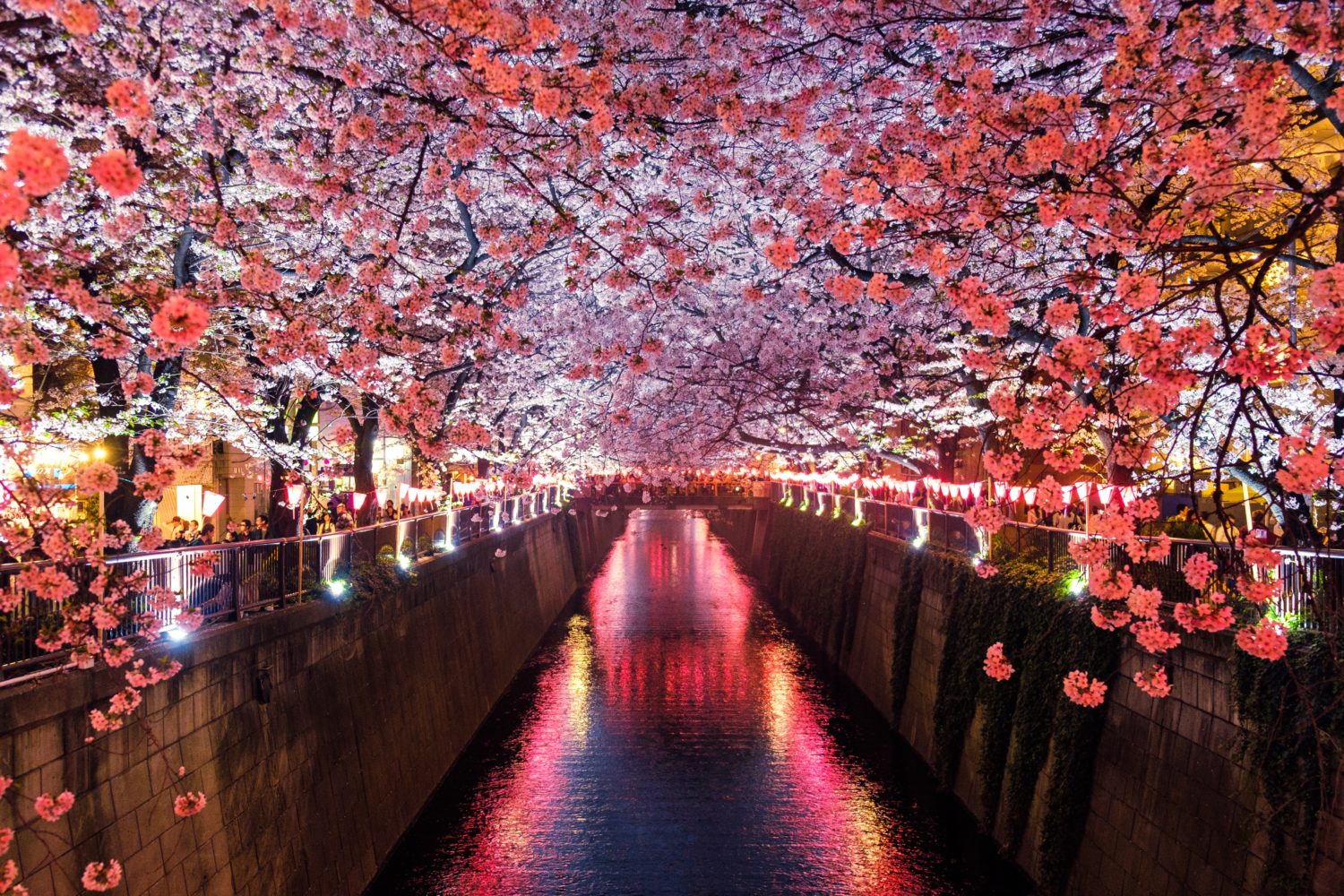 People from all over the world trek to the Himalayas and the countries surrounding them. Some couples may be interested in a resort like The Kalista tucked into the Indian mountainside. Others may prefer to explore spirituality in Kathmandu, Nepal. You can pick your adventure no matter where you go without sacrificing the picturesque views of the mountainside. Photography blog Barefoot and Bearded will tell you the same thing—an elopement in the Himalayas will be one for the books. 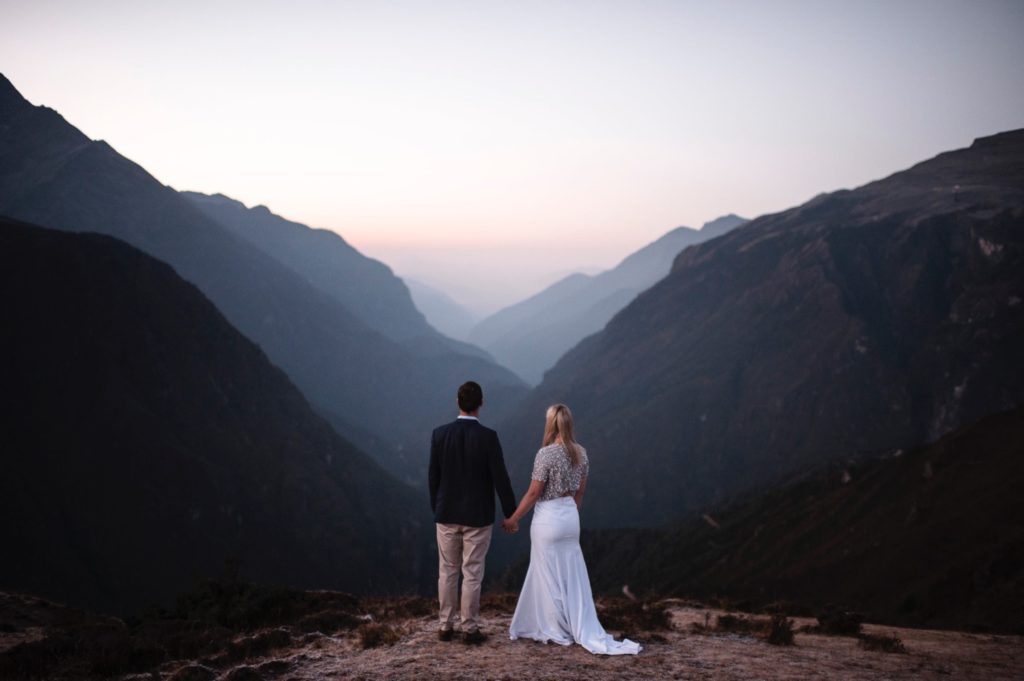 The Arusha Coffee Lounge is a calm, sumptuous place to relax near to the famed Arusha National Park nestled within one of Tanzania’s oldest—and highest quality—coffee plantations. The quiet cool rolling hills, lush and green, are a unique and amazing experience for Eastern Africa.

Arusha itself, with its rural charm, is also great for exploration. Check out a tour of the marketplaces and the gorgeous and coveted Tanzanite gems, which are one of the world’s rarest gemstones (still need a wedding ring? Just grab one in town!) 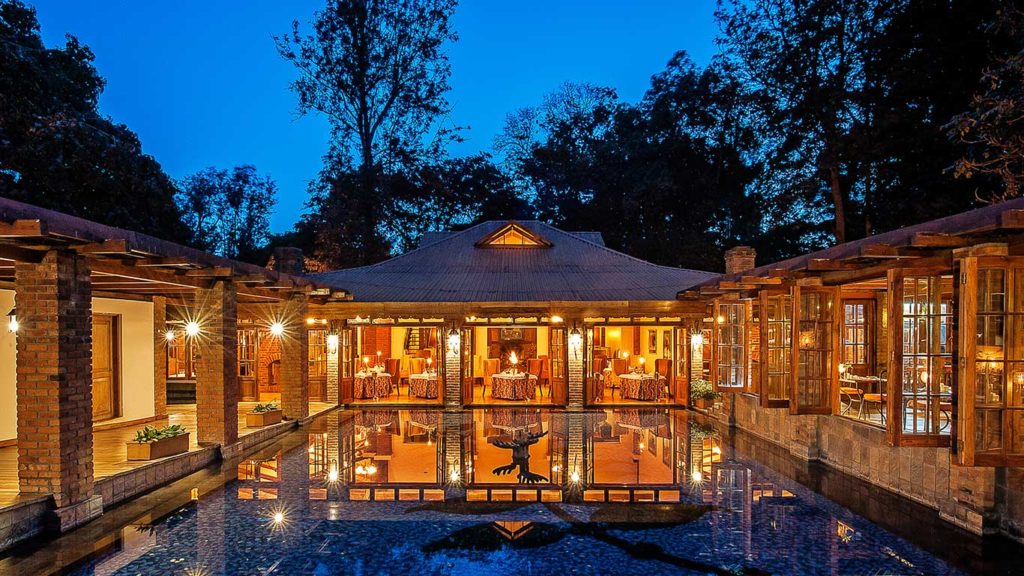 Masai Mara National Reserve is perfect for a Safari-inspired elopement, and the Sarova Mara Game Camp is where to get the entire package—literally. The offer an assortment of wedding packages, but their most basic includes everything from a pre-wedding couple’s massage to a dedicated event planner.

Prepare yourself for the most relaxing beach elopement you can dream up. Poneloya and Las Peñitas are home to some of Nicaragua’s most stunning beaches and delicious beachfront restaurants serving seafood caught in the nearby waters. Keep your ceremony simple and stress-free and enjoy the utmost relaxation at nearby resorts like the Nayal Lodge Hotel and the Costa Maya Beach Club. 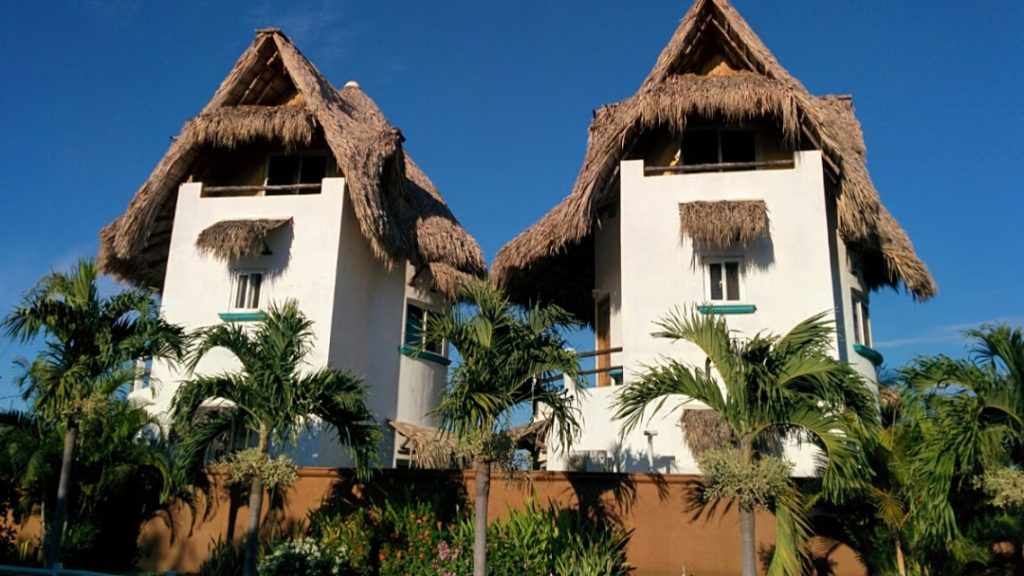 There’s hardly a corner in Cartagena that isn’t picturesque. Walk the colorful streets for vibrant wedding photos, pose in front of the baroque Parroquia San Pedro Claver, or simply stage a beachfront ceremony with historical Cartagena as your backdrop. An increasingly popular wedding destination, companies like Elope to Cartagena have curated elopement and vow renewal packages for you to choose from, ranging from $900-2,200 USD. 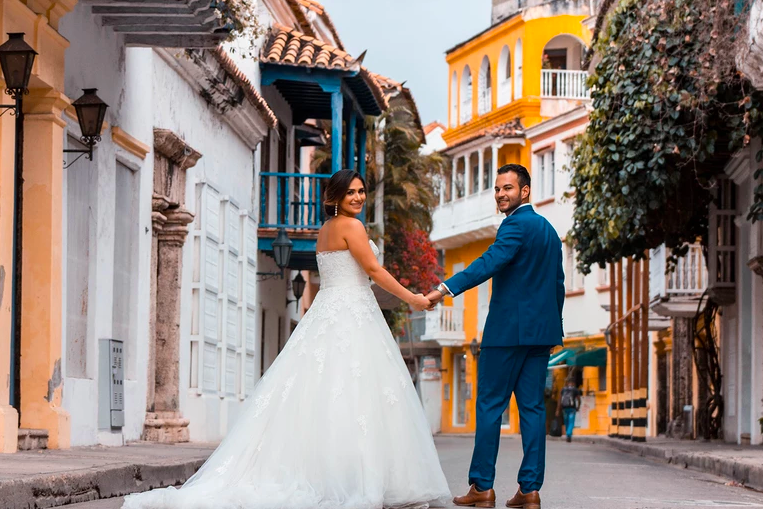 Just west of Sydney, the Blue Mountains in New South Wales is easily one of the most stunning locations on our list. The landscape is a national park, so it is beautifully preserved and maintained. You and your partner will feel like the only two people in the world, ensuring the most romantic way to say “I Do”. Locals know the magnificence of the Blue Mountains well, and some companies like Love in the Mountains offer several budget-friendly elopement packages. 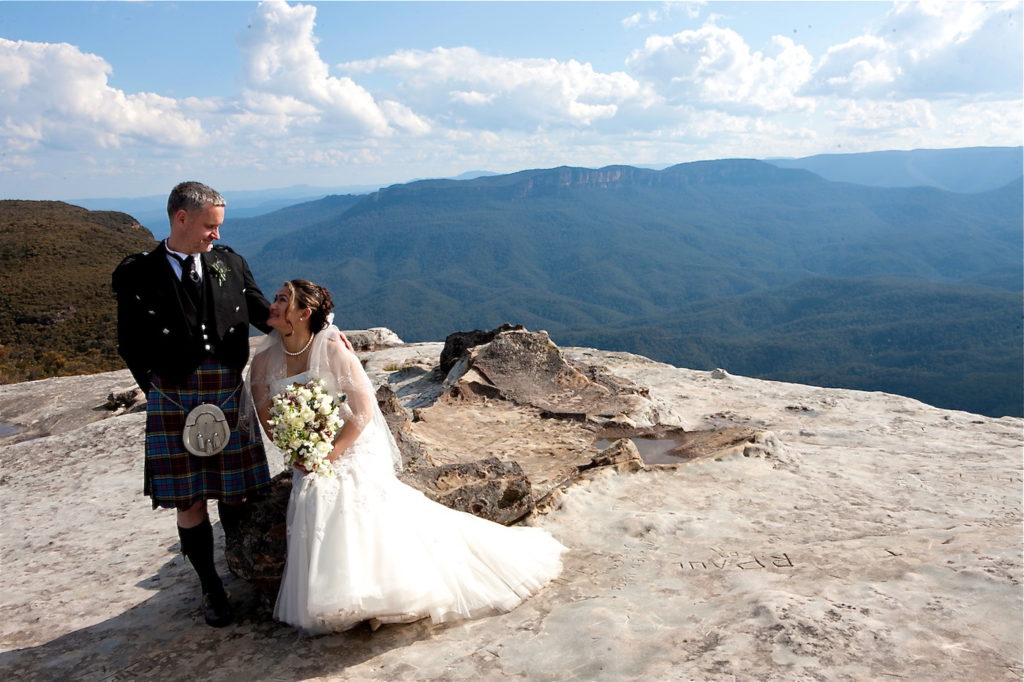 Credit: Love in the Mountains

Big weddings aren’t for everyone, and that’s okay. No matter the reasoning, the attractiveness of modern elopements are becoming more commonplace. Whether you plan the details of your elopement to a T, or jump over to City Hall and celebrate over a romantic dinner later, elopements are just as special as any other wedding. Celebrate your love in the way that’s best for you!

With all of the traditions and superstitions that surround which ring goes where, it’s easy to get confused.

15 Black Makers to Put in Your Wedding Registry

We’re shining a spotlight on some of our favorite Black makers to feature in your home.

Coronavirus: How to Reschedule Your Wedding

Things are complicated right now—let’s minimize the stress of postponing a wedding Covid-19.